I am a Managing Director at Techstars. I invest in entrepreneurs, when I see the right combination of team, opportunity and traction. Read more about me here.

How should marketers respond when a disaster is taking place? Or how should they prepare when they can see a disaster coming? What I am referring to is not a natural disaster, but rather a commercial situation that could quickly become a PR disaster.

One of the reasons that I have been blogging less over the last weeks is a combination of work and the fact that the European Football Championship is taking place. For all those of you who are outside Europe: that would be soccer.

The guys in charge of organizing the event, UEFA, one of the things I have observed they get consistently wrong is to inform journalists about rules of the tournament. As it frequently happens, journalists may only know half the picture, they report it incorrectly and viewers become upset about one or the other aspect of the tournament. I have two examples here. A bad and a good one.

First example would be the match between Italy and the Netherlands. Netherlands beat Italy 3:0. The first goal that the Netherlands scored was widely reported in the press to be offside and thus an irregular goal. This goal tipped the match in the favour of the Netherlands and obviously a lot of Italian fans were angry about the ‘poor’ refereeing at the tournament.

Actually, this was not bad refereeing, but excellent refereeing and very poor journalism. What the commentators overlooked was the fact that there was an Italian player who was lying outside the field, even behind the goal. Players who are outside the field are counted in offside decisions, therefore the Dutch player was not offside. Read up on it here. UEFA, the organisers of the tournament, could have responded quickly by sending an alert to all journalists reporting on the game, advising them that the referee had done an excellent job. They didn’t, and this resulted in bad press. I am convinced that if all journalists had been appraised of the facts within minutes of the goal, then all of this would have been a non-issue. Now it is simply very bad press for the tournament.

My second example is a much more significant disaster in the making. Take a look at the current standings and particularly those in Group A. 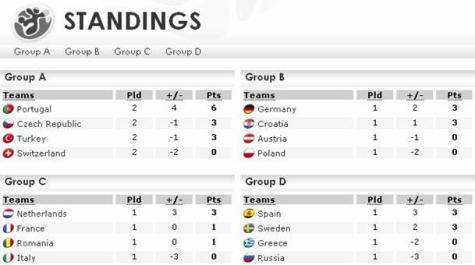 As you can see, Czech Republic and Turkey both have the same number of points, the same goal difference and the same number of goals scored and conceded. There is only one game remaining for both teams when they will play each other. Should this game be a draw, then what happens exactly, who will progress to the next round?

UEFA is making things clear by posting a story on their homepage that states that in the case the teams finish their game in a draw, there will be a penalty shoot-out. They then provide a link to the rules of the tournament. I have read the rules. They are not ideally written, but it sort of becomes clear.

If you want to manage the perception of the public well, you have to communicate well. Communicating well means to explain very clearly what happens, why it does and what that means. UEFA is trying to do this by posting the rules directly for all to read. I guess they are also briefing journalists directly on the situation.

UEFA is handling this well. If they could handle situations like the Italy game in a similar way, then it would be even better. What I learned from that is that communicating the right thing too late has little effect. But if you can do it quickly, you can prevent disasters from happening, before they even occur. Interesting what one can learn about business by watching football.